Vampire Savior: The Lord of Vampire Capcom Game Soundtrack was released on August 17, 1997 through Victor Entertainment and features music from Capcom's Vampire Savior: The Lord of Vampire. The game's soundtrack was composed by Takayuki Iwai (also known as Anarchy Takapon) and Masato Kouda. The sound effects and voices were edited by Takeshi Kitamura, who is credited as Moe.T.

The soundtrack was split into two discs, Red side and Black side. The Red side features 42 tracks and is around 51 minutes long while the Black side features 41 tracks and comes in at 49 minutes. Included amongst these tracks are exclusive arranged versions of Demitri's (Red) and Morrigan's (Black) stage themes produced by Naoshi Mizuta (as Mta) and Satoshi Ise, respectively. 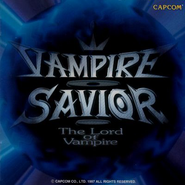 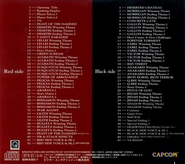