Vampire Savior: The Lord of Vampire

Jedah, one of the high nobles of Makai, is resurrected after a premature death long ago. Seeing the state of the demon world, he decides that the only way to save the world is to recreate it. To this end, he conjures a dimension known as Majigen, to which he summons worthy souls to feed his new world. As luck would have it, those souls belong to the Night Warriors from the first two games, in addition to three newcomers.

The game retains the character roster of Night Warriors: Darkstalkers' Revenge, though omitting Donovan, Huitzil and Pyron from the lineup. Taking their place are four new characters; Jedah Dohma, Lilith, Q-Bee and Baby Bonnie Hood. Vampire Savior eschews the traditional round-based system in favor of what is dubbed Damage Gauge System; battles take place during a period of one round with each fighter having two "life markers" (by default) which are diminished after one's life bar is completely emptied (similar to Rare's Killer Instinct). The player can also regain a portion of their life during battle if they avoid taking any further damage. The game also introduces the Dark Force System which allows players to activate special abilities unique to each character for a limited period of time and deal permanent, irrevocable damage.

Console ports of the game feature the original Dark Force, titled Dark Force Change and the ability to select Dark Force Power from Vampire Hunter 2 and Vampire Savior 2. Dark Force Power requires two levels of the characters' super bar, damage done during Dark Force Power cannot to be healed and certain EX attacks become slightly more powerful. Many of the console ports restore Donovan, Huitzil and Pyron, who were left out of the original arcade release, presumably due to memory storage constraints. A character customization mode "Original Character" enabled the player to unlock features of additional art gallery or additional options, such as the EX options which allows for the Vampire Savior gameplay style with elements from Vampire Savor 2 or Vampire Hunter 2 in terms of music, design, and match-ups in both Original Character and Arcade Modes to use the same style as the mode it is currently set on.

The English version also includes a full translation of the ending used in Vampire Savior 2 and Vampire Hunter 2 for Arcade Mode which switched to this version in EX Options. 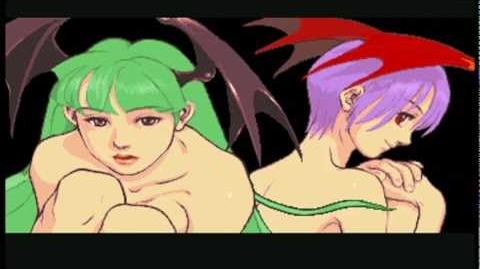