"When the World Warriors meet the Night Warriors -- they'll raise Hell! These time-tested combatants have met many times in the arcades, but nothing can prepare you for their first action-packed, fan service-fueled comic crossover! Villains will unite, friends will become foes, and the worlds of Street Fighter and Darkstalkers will be changed forever!"
–Udon Entertainment

Somewhere dark, Chun-Li awakens in a panic to find herself in a strange forest. As she wonders in confusion over her whereabouts, Chun-Li hears a mysterious voice call out to her, urging her to go to the mountain in the distance. Chun-Li demands that the voice's owner show themselves when she is attacked by a large, insect demon. Horrified, Chun-Li resists the creature's attempts to attack and devour her and swiftly defeats it with her Tenshokyaku technique. As Chun-Li wonders if any of this is real, she is besieged from all sides by even more insect demons, and just as they begin to swarm around her, she is saved by a Tiger Shot fired by the Muay Thai Emperor, Sagat, who urges Chun-Li to use her ki techniques against the demons.

Though initially distrustful of Sagat, Chun-Li is assured by Sagat's companion, Ken Masters, who uses his flaming Shoryuken on one of the demon, the flames of his ki harming the other demons eyes. Working together, Sagat, Chun-Li, and Ken each use their ki techniques, Tiger Shot, Kikoken, and the Hadoken, the combined attacks sending the insect demons fleeing. Chun-Li asks Ken if he has ever seen creatures like the ones they fought, with Ken explaining only after waking up in the strange forest they find themselves in. When Chun-Li wants to question Sagat on whether or not he knows where on Earth they are, Ken points out to Chun-Li the two moons hovering in the sky and points out to her that they are no longer on Earth.

At Castle Aensland, Morrigan Aensland is dreaming, recalling when her father Belial Aensland separated her soul and wonders when she will be complete and whole again when she is awoken by her servants, Lucien and Mudo. As the two go over her itinerary for the day, Morrigan yawns, explaining to her annoyed servants that she had an unexpectedly exhausting venture into the Human World the night before. Morrigan's servants chide her for shirking her responsibilities, with Morrigan being warned that another ambitious family within the Makai could rise up, not unlike how Demitri Maximoff or Jedah Dohma did in the past. Morrigan brushes her servants worries aside, reminding them that Demitri is frozen and adrift in space, and Jedah is rotting in the void between realms her father previously sealed him in. Morrigan sends her servants away, promising to meet up with them to address their worries, but with a devious smirk, Morrigan summons her traditional outfit and slips out for a quick 'bite' in the Human World.

Elsewhere, Chun-Li, Sagat, and Ken rest around a fire, discussing the last thing they remember before waking in this strange world they find themselves in. Each realize they all encountered the same purple-haired, winged girl before losing consciousness and waking in this new realm. As Chun-Li asks her companions if they heard any strange voices upon their arrival, Sagat spies a pair of eyes observing them from the shadows of the forest and shouts at Chun-Li to duck before firing a Tiger Shot at the eyes. From the shadows, a werewolf lunges out, striking Sagat before attacking Chun-Li. Before Ken can help, he is attacked by a catwoman, who demands they leave Jon alone. Ken is shocked by her appearance, defending himself from her attacks while Chun-Li continues to battle the werewolf. As the two trade blows, Chun-Li recognizes the werewolf's fighting style as kung-fu and realizes the wolfman is human, with the werewolf finally calming down as he confirms Chun-Li is 'half-right'. Sagat too realizes that the werewolf is a trained fighter like them and apologizes for attacking him, much to the catwoman's delight as they realize they can call be friends now.

The catwoman introduces herself as Felicia and gives her friend's name as Jon Talbain, explaining that this strange world's two moons are affecting his mood as a werewolf. Ken is stunned to realize the two are not from this world as Felicia explains she was coming from an audition for a show in Vegas when she was attacked by a bat-girl. As Ken states that they are all in the same boat, Chun-Li tells them that the voice she heard urged her to go to the mountain, with Ken reluctantly agreeing to the plan.

In the realm of Makai, at the reclaimed Castle Dohma, Jedah Dohma observes the encounter between the World Warriors and Night Warriors, disappointed by their peaceful resolution before reminding himself that there is much more conflict to come. His ally, the fallen messiah Gill, questions whether this will be enough and if it is time for him to fulfill his chosen task. Jedah urges Gill to be patient, reminding him that Lilith has only just recruited the undead 'god of metal' to their fray, with Lilith excited to see him in action. Looking into his scrying pool, Jedah observes the various battles between the Street Fighters and Darkstalkers, noting that both positive and negative energies are beginning to flow as they unwittingly serve him through battle. Jedah states he has waited centuries for the coming perfect future that he has conceived of and that the captured warriors of light and dark will provide the spark to bring it about.

Wanting to leave nothing to chance and desiring more, Jedah tells Lilith he has another errand for her. Conjuring the image of the cursed samurai warrior, Bishamon, Jedah tells her to seek out the cursed armor Hannya and the bloodthirst sword, Kien, commanding her to bring them to him. When Lilith asks if they should refuse, Jedah gives her a vial of his immortal blood to offer them for their loyalty and services.

Elsewhere, in the strange realm, Lord Raptor in his human form awakens, bemused by the fact he was out of it for a while after being teleported by a succubus. Summoning his guitar and taking on his undead form, Raptor boasts that it's time to rock 'n' roll as he plays a rift, summoning an army of zombies, with Lord Raptor cackling that it's time to put on a show. 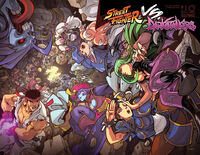 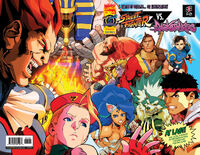 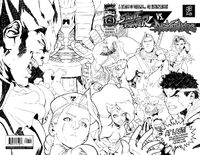