Chun-Li is contacted by her former chief to help the investigation of a murder. In the morgue, Chun-Li is presented the victim and she is shocked to see how horribly emaciated his body is. Using her awareness of chi, Chun-Li determines that the victim was drained of his life force. Suddenly, the coroner reveals herself to be the succubus, Morrigan Aensland, who compliments Chun-Li's perception before reassuring her the victim's end was a pleasurable one, with Morrigan stating that her victims souls always taste better if they're happy before she devours them. Morrigan attempts to drain the soul from Chun-Li's chief but Chun-Li kicks the succubus away, demanding to know who and what she is. Morrigan introduces herself as the heir of the throne of Makai and devourer of souls. She then turns her left wing and arm into a clawed tentacle to yank a wall down atop Chun-Li, angered at her interference. As Morrigan expresses disappointment at seemingly killing Chun-Li already, the female martial artist bursts from the rubble and lands a second kick on Morrigan before unleashing her Kikoken, all the while proclaiming herself the strongest woman in the world. Morrigan is knocked out into the streets where her body vanishes in a flurry of bats, leaving Chun-Li wondering if she has returned to her own world. In reality, Morrigan is observing Chun-Li from atop a roof, internally noting that the human world is too much fun.

In Antarctica, Akuma rages in a fury from his defeat at the hands of Gill, who stripped away his demonic form Oni. As Akuma raves that his mortal body is too weak to contain the full power of the Satsui No Hado and that he must reawaken the demon within, the Oni, Donovan Baine announces his presence behind him, declaring that the world needs no more demons. Donovan states that Akuma is unlike any Darkstalker he has ever faced in the past but carries the same malevolent aura and will meet the same end as all others who have crossed his path. Akuma tells Donovan he is wasting his time, as he is not a Darkstalker and warns him to leave if he wants to live. Donovan proclaims himself a Night Warrior, charged with purging the world of the dark ones who threaten it, and while Akuma prepares for battle, Donovan lands the first blow with his sword, Dhylec, landing a deep cut on the Master of Fists arm, with Donovan stating this is not a battle, but an extermination, before throwing his blade at Akuma. Donovan is shocked when Akuma stops the blade with a wave of his hand and draws it to himself, transforming into his all powerful Oni form as he does, revealing the dark power within Dhylec is similar to his own Satsui No Hado, which has allowed him to regain his demonic form. In thanks to Donovan, Oni slashes his chest open with Dhylec and prepares to finish the warrior when Anita uses her psychic power to stop the blade and take it back while creating a barrier around Donovan to protect him. Anita challenges Oni to approach her, declaring she will destroy him. While Oni is impressed by her power and desires to battle her, he has another commitment to see to before challenging Anita to face him once Donovan is healed before vanishing.

In Brazil, Blanka is enjoying a day at the beach with his mother when Sasquatch arrives with several other Yetis on rafts, proclaiming the territory theirs in the name of their tribe. Sasquatch orders Blanka to leave while Blanka is annoyed by the 'furry teddy bear'. Angered, the two brawl, Blanka using his electrical abilities against Sasquatch's ice powers, but just as the fight begins to pick up, Sasquatch becomes distracted by some bananas fallen from a tree, though Blanka snatches them up and refuses to share. Blanka's mother chides him for not sharing and the man-beast reluctantly does so, causing Sasquatch to declare them friends of his tribe and vows to defend him from any threat to Blanka-or their bananas. Just then, Rikuo arrives on the beach, joined by several other mermen, declaring the island and its waters to be property of his empire.

In Hong Kong, Yun and Yang offer tribute to their departed uncle, Gen before leaving. Gen's spirit rises over his grave, musing that the weight of his sins in life will never allow him peace in death, when he is approached by the Night Warrior sisters, Mei-Ling and Hsien-Ko, who offer to send him to the next realm peacefully, before warning him that resisting will only make it painful. Mei-Ling then transforms into Hsien-Ko's ward seal and joins with her sister, who attacks Gen with her large claws. Gen dodges Hsien-Ko's attack while expressing anger that Jiang-Shi such as the sisters would know anyway of giving his soul peace, calling them tormented souls as unnatural and undead as he. Hsien-Ko retorts that she and her sister chose their forms to protect the world from the Darkstalkers pestering it while declaring that Gen and his kind have tormented mankind long enough. Gen challenges Hsien-Ko to defeat him to truly give his spirit rest before launching a strike that Hsien-Ko blocks with her gong. Hsien-Ko retaliates with a sonic wave from the gong, but Gen is unaffected and unimpressed. Proclaiming his time almost up, Gen unleashes his deadly Shitenketsu on Hsien-Ko, but before he can land the deadly final blow, Mei-Ling unleashes several enchanted talismans to bind Gen in place, allowing Hsien-Ko to use her Chireitou in an attempt to defeat Gen and send him to the afterlife. Before the blades of her attack can hit him however, Gen's spirit fades away, his time up. Though Hsien-Ko is frustrated he got away, Mei-Ling reassures her the night is young and there are plenty more Darkstalkers to hunt as the two walk off.

After his death at the hands of Ryu's Shun Goku Satsu, the messiah of the secret society, Gill, finds himself plunging into a strange mountain pass, landing in a fiery crash. Rising up, he wonders how long he was falling, before setting off, deciding to put his faith in Heaven while stating aloud he will fear no evil. Gill's presence attracts dozens of demons, who mockingly tell him there are things he should be very afraid of, hungry things. A massive four-armed demon stalks towards Gill, musing over his strange appearance and wondering aloud if he is an angel. Gill declares himself Heaven's will made flesh and demands the demons help him return home and be spared from his wrath. While this amuses the lead demon, another attacks Gill in impatience, only to find itself floored by a blow to the head. Gill easily fights off several more of the demons before unleashing a blast of fire against the lead demon, who is unfazed by the attack, and mocks Gill for believing demons born of the Makai could be harmed by fire and asks Gill if that is the extent of his power. Gill retorts that it is far from it, boasting that he is the master of opposites, positive and negative, light and dark, fire and ice, before freezing the lead demon's head in a block of ice and shattering it with a single punch. At the sight of their leader's body, the remaining demons flee. From afar, a voice asks Gill to forgive the demons for the rude welcome they gave him. In the distance atop a cliff, a figure tells Gill he deserves respect and admiration for possessing such power, before his body melts down into a puddle of blood before the fallen messiah. As Gill studies the blood, Jedah Dohma reforms before him, his hand extended in offer as he tells Gill that they have both fallen far from grace, but declares that together they will reshape the universe itself.

Combined Issue Zero and One Cover 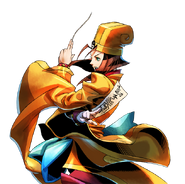