Edit
watch 01:58
'Darkstalkers Resurrection' - Sasquatch
Do you like this video?
Play Sound
Sasquatch

Sasquatch is a bigfoot who was first introduced in Darkstalkers: The Night Warriors (Vampire: The Night Warriors in Japan). He belongs to a tribe of similar creatures from Canada, which are known for their love of bananas. He has appeared in every game, with the exception of Vampire Savior 2.

Sasquatch is the most noble of his tribe of Bigfoot that live deep in the Rocky Mountains of Canada. When he sensed the powers of the extraterrestrial Pyron, he set out to discover the source of said power. After returning to his village, he finds members of his village have disappeared. In the center of his village was a huge hole. Determined that his fellow villagers have been pulled into trouble, Sasquatch jumped into the hole to help them. In the end, he found out that his fellow Bigfoot went willingly because Jedah offered them lots of bananas (not knowing that he is evil).

Sasquatch is a proud, strong willed, bold person who cared for his people, he enjoys a good fight and very found of a test, he enjoys the taste of fruits such as bananas, and is very friendly to people who help him.

Sasquatch and his kind have a supernatural ability to control water and turn it into ice through their body for fighting, they can sense the energy of another from miles aways, and have good hearing far greater then that of a human.

The village lies in a basin within the Rocky mountains of Canada. It is surrounded by steep mountains. Below their village is a huge frozen lake which is covered with thick ice. This is where they catch their primary source of food, fish. About 100 Bigfoot's live in this village. To them, it is more like a big family than a tribe.

The temperature is constantly at -30 degrees Celsius (-22 degrees Fahrenheit). Near the entrance to their village is a village called Crevasse. A snowstorm blows at a rate of 20 m per second (45 miles per hour). It is very hard for a human to enter this village. Even if they somehow do, if they make the Bigfoot's mad in any way, their chances of making it out alive are slim.

They have their own distinct network using Makai Seals called Makai Postal. This is the Bigfoot's information source and it proves a cultural and modern standard of living. Even when Sasquatch left his village, they used Stone Mail to contact each other. It's delivery service spans all over the world. It can send mail to the South Pole or North Pole within 4 days. This is due to the Makai race of Mach-Crab beasts.

The Bigfoot race is not a violent race. In fact, they are friendly towards other races. But this is only if manners are shown. As long as you don't treat them as wild beasts or show beasts, and show signs of friendship, they will reciprocate by also showing signs of friendship. To them, human sincerity means bananas or other delicious foods. To keep a good relation, food is an essential item.

The Bigfoot live together in the same village with the Makai Snowslide Penguins. They help Sasquatch when they hear about the disappearance of their village members. Their desperate attacks tend to draw tears.

The Snowmen of Bigfoot Village belong to a Makai race called the Snowman race. They have the ability to make it snow or to cause the temperature to fall. To aid Sasquatch, they follow him into Majigen.

The Snow Beast race are a very shy Makai race that resemble sled dogs. They are very friendly towards the Bigfoot race, but rarely show themselves. When it is urgent, they quickly appear and pull Sasquatch very powerfully.

The small Makai Whale is a long time friend of Sasquatch. It's huge blow from its tail is always powerful. There have been interchange since the tribe leader Tundra was young.

The North American version of the Abominable Snowman, or Yeti, from the Himalayas. In Canada it is called a Sasquatch, while in the United States they popularly refer to it as Bigfoot.

The word Sasquatch closely resembles and is derived from several native names for the creature used by tribes in the coastal area of the Pacific north west. The creature is supposed to be at least 2.1 m (6'9") tall, but adults can be as tall as 3.5 m (11'5"). Its footprints measure somewhere between 40-55 cm (16-20 inches). It has long arms, an ape-like face with a flat nose, and thick hairy fur. Sasquatch lives in the caves and hidden valleys of Canada and North America.

It was first seen by white men in 1811 and since then there have been hundreds of reports on sightings and encounters. There are several photos and films of the creature, besides casts taken from its footprints, but many of these turned out to be forgeries. There are numerous people who claim they have either seen the creature itself or its tracks. Expeditions set out to search for Bigfoot have never found it, nor is there scientific evidence for its existence.

It is believed by some that the Sasquatch may be related to Central Africa's mountain gorilla which Western scientists first discovered in 1903. This coincides with the date of birth given to Sasquatch. In that same year, a newspaper printed the testimony of a man who said he watched as a man was killed by aborigines, which he said looked like a black man, but covered all over with gray hair.

Darkstalkers the Animated Series Sasquatch is renamed to Bigfoot and has a nephew named Hairball. In Udon Entertainment's Darkstalkers: The Night Warriors issue 02, Sasquatch is featured in his own side story. In this side story, Sasquatch's tribe and tribe leader, Tundra appear.

Sasquatch as Bigfoot in the animated series.

Sasquatch in the anime. 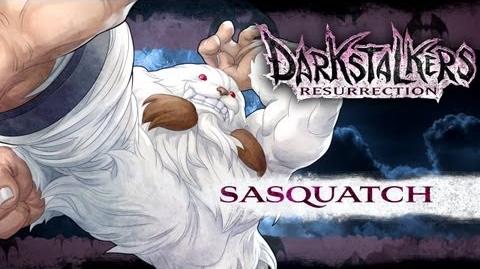 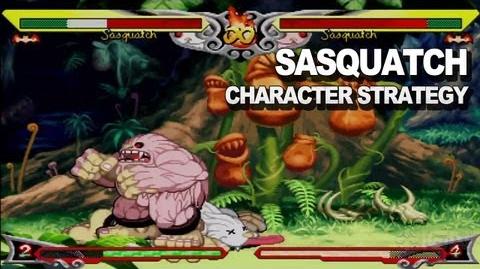 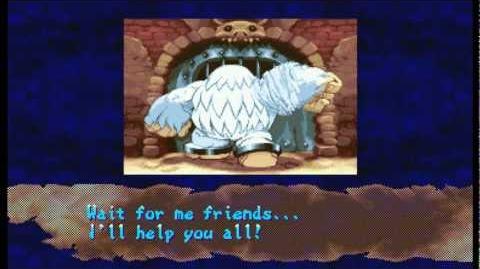 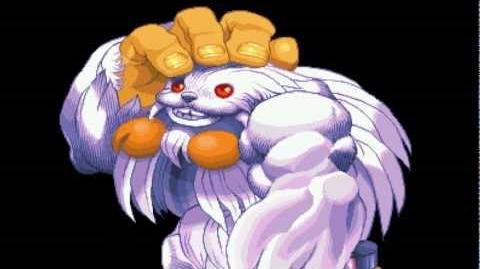