Rikuo, or Aulbath in Japan, is a character in the Darkstalkers franchise of video games, debuting in Darkstalkers: The Night Warriors. He is a merman based off the titular creature in the 1954 film Creature from the Black Lagoon. He has a wife named Aqueria with whom he has several children. He has made several cameo appearances in various other video games and media, as well as featuring in his own mobile phone game.

Deep beneath the Amazon lay a kingdom of the 30,000 merfolk. One day, the peaceful aquatic empire was shattered by a tremendous earthquake and volcanic eruption. The Emperor and hero, Rikuo, was the lone survivor. His home destroyed, he was filled with rage and upon discovering that Pyron was responsible for such evil, he vowed to stop him. Upon meeting another survivor, Aqueria, he settled down with her to start a family and rebuild his empire. Together they moved out of the Amazon into the great ocean to raise their three sons and 12 unhatched eggs.

Rikuo and his family reside in an oceanic crevice, 150 m (492 ft) deep. The current of the ocean does not make its way into the area and is a perfect location to protect their eggs from danger. His current duty is to search for any other survivors of his kingdom. He searches in a radius of 200 km (124.27 miles) for any other surviving Mermen. Though close to his home is a deep oceanic trench and a fast ocean current runs through it. If Rikuo fell into the trench, even he couldn't swim against the strong current. And the deepest he could search was 1000 m (0.62 miles) deep.

It was a endless search, but Rikuo believed that other mermen had survived. Ever since he and his family had moved to this sea, although very faint, he had sensed the life of something similar to his own race. As days pass, his search for his fellow merman increases in area and the time he spends with his family decreases. During one of his searches, one of his sons, Alba disappears. He ponders to himself about how one could defend a kingdom if he cannot protect his own family. Believing that his son was sucked into the Majigen, Rikuo heads his way into Jedah's realm. But when the powers of Makai start to fade, the dark sea of Sargasso was opened and Rikuo found his son along with a new race of merman. The two families now help to build the civilization of the sea.

He often finds humans to be very interesting, even to those who seek to prefect nature.

Rikuo has many supernatural skills such as the ability to transform into different kinds of sea life; namely fish, crustaceans and amphibians. He can swim extraordinarily fast underwater, can call out to other oceanic creatures to help him with missions and rescuing people, mimic different water-based animalia to ascertain new skills and attributes, also. On a rainy day, his strength will grow to incredible heights as well as his other abilities. on top of all that; he can even call upon the winds and the waves to manipulate oceanic currents and stimulate certain weather phenomena for aid in battle. Namely, he can summon tidal waves to wash away his adversaries in a rush of drink water.

Because of his kind being of fish origin, Rikuo's strength is much more limited on land, making him much easier to fight against.

Aqueria was an ordinary female of the Merfolk race. At the time of the destruction of her kingdom, she had been swimming on the outskirts of the kingdom. She was swallowed by the current caused by the eruption. When she awoke, she was thrown into an unknown world, onto land. She had been thrown into the dense forest of the Amazon. Not knowing how to get home, she searched for any place with water. After searching for half a day, she found a lake which was like a puddle of water. This also happened to be a lake that Rikuo visited often.

She waited for a few days but there was no signs of her friends coming to save her. After making up her mind, she follows a faint smell to an entrance to an underground river. She then makes her way back to her kingdom.

When she came back, she saw her kingdom swallowed by a dark crack in the sea. She intuitively realizes that she had lost all her friends and crumbles to the ground without any words. But she still had not lost hope. She believed that king Rikuo would have somehow survived the disaster and he is still alive somewhere. And that he will come save her soon.

After believing and waiting for half a year, the young girl and Rikuo are re-united. A new love is born and the beginning of a new kingdom had started.

Rikuo's kingdom is different from a Monarchic Government or Imperial Rule. There are no royal families. Each king is chosen by the previous king. After obtaining the people's consent, the next king is chosen. Every Merman is given a rank, they are strongly united, and they keep a mutual trust with this.

The ranks do not mean a social position but it is more used to give each one a job that suits them: those who gather food, those who protect their own from danger, those who create habitats, those who care's for the young. Out of these many jobs, raising the young is usually done by the males. Similarly, the females are raised by their own mothers.

In the case of males, their mimicking abilities is usually used to scale their strength level. It is important for those caring for the young to teach the young this Rikuo had cleared this ability beyond anyone else. It can be said that, for his son Ricky, he is the greatest teacher.

The merman race have reproductive periods. The average time for mermen to lay eggs is around the human age of 16 to 22. They bear eggs two times within one year averaging about 10 to 20 eggs. On average, a couple lays 60 to 120 eggs. But only 10% of these hatch and out of those, only 2 to 5% of these survive. A few hundred years ago, the lake they used to live in was fresh water. But within the last 10 or so years, sea water had flowed in and caused the salt level to rise. This may have been the reason why Rikuo and his family could live in the sea without much trouble against the salt level. But this may also be the reason for the decreasing birth rate.

7000 years ago in Babylonian mythology, there was a god, Ea (who would later would be called Oannes by the Greeks), who was a water god. He was depicted as having the upper body of a man and the lower body of a fish. From the beginning of civilization as we know it, there have been Merfolk.

The idea of Merfolk could be based on these creatures from Greek and Babylonian mythology: Sirens and Tritons of the Greeks, and the fish gods, who were half human and half fish, from the Babylonians. The belief in Merfolk is not limited to a few countries, but there are tales from all over the world. For instance, in India there are the Apsara, beautiful water nymphs. The most well-known of the Merfolk are the Mermaids.

Mermaids are marine creatures with the head and upper body of a beautiful young maiden and with the lower body of a fish. They can be found in seas and lakes or lying on a rock and combing their hair with one hand while holding a mirror in the other. Mermaids sometimes foretell the future and are often accompanied by seals.

According to myth, they lure sailors by singing and with lovely music. They live in a kingdom on the bottom of the sea, and it is here they take their prisoners to. From this story, the fear amongst the sailor grew and they thought that seeing a mermaid would cause bad luck: it could predict death by drowning.

Creature From The Black Lagoon[]

Rikuo's date of birth coincides with release date of the classic tale The Creature From The Black Lagoon. In this film, a team of scientists descend upon the Amazon prompted by archaeologist Dr. Carl Maia's (Antonio Moreno) discovery of a strange, half-man, half-amphibian skeletal hand from the Devonian period. Led by scientist David Reed (Richard Carlson), fellow scientist and girlfriend Kay (Julie Adams), and their jealous benefactor Dr. Mark Williams (Richard Denning), they soon discover that the fossil they seek is alive and well and hopping mad from their intrusion in his territory.

The Creature was so successful that it spawned two sequels, Revenge of the Creature and The Creature Walks Among Us. Rikuo's name is likely in homage to Ricou Browning, one of the two actors who played the Gillman in the original film.

The Creature, or Gillman, is either the last remnant of a 15 million year old species, or has itself survived since the Devonian age. He is substantially taller than the average human male, thought to be between somewhere between 173 cm - 196 cm (5'8" - 6'5"), although never accurately measured and it is estimated his weight is around 136 kg (300 lbs).

He behaves much like the African lungfish, which lives underwater during mating season, but breathes surface air when its lake habitat dries up. His composition is approximately 35% white corpuscles, or halfway between marine life and mammal. It is also important to note that these white corpuscles have no nucleus.

His outer layer of marine scales cover a layer of mammalian epidermis. Living primarily in the dark depths of the sea, the Creature reacts adversely to bright light. Although it has been known to exhibit violent tendencies, such actions can be classified as defensive. Typically, it usually hunts fish for its food.

Rikuo appears in Darkstalkers the Animated Series. He also makes a cameo in the intro to Night Warriors: Darkstalkers' Revenge anime, as well as the beginning of its fourth episode, in which he's rather graphically killed by Pyron. 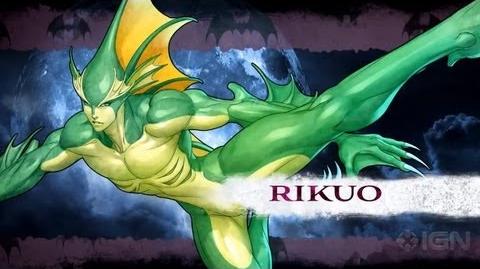 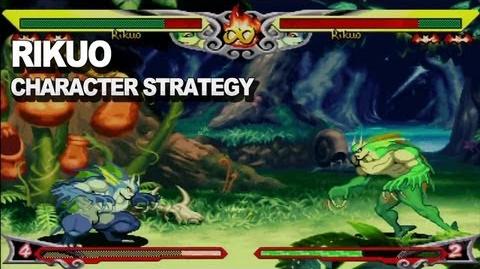 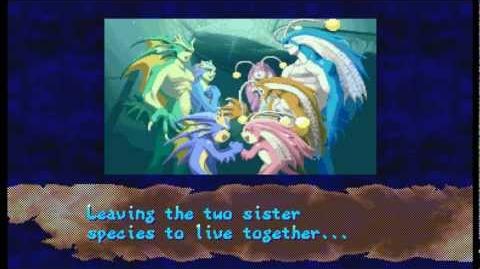 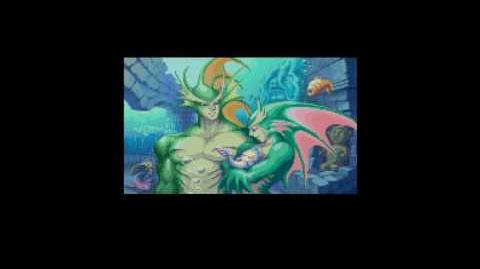