Q-Bee is a fictional character who first appeared in Darkstalkers 3, known as Vampire Savior in arcades and has not made a playable appearance outside of the Darkstalkers series. She is the only character to have her winning dialogue in katakana only. 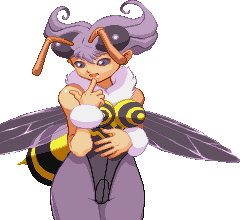 Q-Bee's quotes have somewhat different contexts between Japanese and English, and some of them are redundant. As a result, 3 of her quotes are completely different in English. Also, her Japanese quotes are all written in Katakana, as it is usually for foreign words or for unusual non-human-like speech.