Ozom is referred to as a "soul gourmet," and is depicted as being deceptive and manipulative. He is also mentioned as Master Ozom or Emperor Ozom.

Ozom was once an invaluable assistant to Jedah Dohma, until the day he deceived him and caused his temporary demise.[1] Similar to Jedah or Q-Bee, Ozom had a fondness for delicious souls. Although he lacked the power of the S class nobles, he was considered brilliant when it comes to plotting and scheming.[1]

During Jedah's rule as leader of the House of Dohma, Ozom had managed to become one of Jedah's most trusted aides. Ozom's true reason for his servitude was in hopes of gaining access to the leftover souls from which his master had dined.[1] After the discovery of a portal, Ozom suggested that Jedah consumed some of the energy from one of the portal's seals, using Jedah's trust in him to his advantage.[1] Jedah did have the skill to absorb the energy, but he did not foresee the amount of energy the seal held and soon was unable to contain it, causing his destruction.[1] After the noble's death, Ozom took control over the Dohma land and became head of the Dohma House.

As ruler over the Dohma land, a young rocker by the name of Lord Raptor caught his attention. In exchange for power, Raptor sacrificed himself and 100 of his fans during one of his performances.[2] When word of Raptor's work reached Ozom, he resurrected him as a zombie and enlisted him into his service. However, knowing that Raptor may deceive him, he deployed Le Malta (a small purple cyclops-like creature), to spy on Raptor from the shadows.[1] During this time, Ozom may have neglected the lands of his kingdom, as the Soul Bee population were in trouble, with the possibility of extinction.[3]

Ozom's place in Makai's hierarchy would soon change with the return of Jedah, over a hundred years after his sleep.[4] Jedah took Ozom's soul and used it as the base for his new realm, Majigen, where Jedah would bring the souls he thought were of value to his plains of controling the realm of Makai.[4]

In Night Warriors: Darkstalkers' Revenge, Lord Raptor's epilogue states he goes to confront Ozom. This may not have happened, as no mention of the two battling is ever stated outside of this. In Darkstalkers 3, Raptor goes to fight Ozom, only to find a portal to Majigen and Ozom gone.

During Jedah's dialogue towards Raptor, Jedah states he doesn't know what happened to Ozom, but that he might have become a part of him. 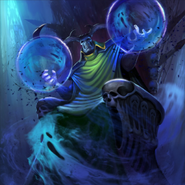