Morrigan Aensland is a fictional character in the video game series Darkstalkers. She first appeared in Darkstalkers: The Night Warriors (Vampire: The Night Warriors in Japan). She is an anti-hero and a main protagonist alongside Demitri Maximoff. In the series main canon, Morrigan's father, Belial Aensland, had split her power into three. Later in the events of Vampire Savior: The Lord of Vampire, Jedah Dohma would find part of this power and give it a body as Lilith.

Morrigan was a very special Succubus, even within all of the Darkstalkers. She was born as an S Class noble. But at that time, roughly 300 years ago, a struggle for power had already started. Various battles had occurred in various locations. It was unacceptable for a Succubus child to be given rights to power at the time. The problems didn't end there either. Morrigan had no way to control the enormous powers that she held within. If she were to be left alone, she would destroy herself and the land around her. Belial, her adoptive father and head of the Aensland House, split her soul in three to protect her; one he kept within himself, and another in a pocket dimension. Morrigan grew up without knowing this. She found her life in the Aensland castle dull and visited the human world time and time again to look for some kind of fun. One night, she was drawn to the strange power permeating from Pyron and ventured into the human world again.

After she came back from the human world, she was told that Belial died and she was the next successor to the throne of the Aensland family. Due to Belial's death, the 1/3 power he split from Morrigan during her childhood returns to merge with her. Although she is rightfully the ruler of Makai, she avoids her duties and continues her life like before. But when Jedah created the Majigen, she and her castle are pulled into Jedah's dimension. Sensing Lilith, the now sentient remainder of her soul sealed off, and released by Jedah, Morrigan set off hoping to find some sort of enjoyment. After meeting with Lilith, she was finally able to return to her true self when the both of them fused back together into one.

Whether Morrigan truly accepted her fate to be Makai's ruler after the events of Vampire Savior remains to be seen, but various media such as the crossover series suggests she may have accepted this, to an extent.

After the events of Vampire Savior, Morrigan defeated and destroyed Jedah, ending his evil reign of terror over both the Human World and the Makai.

Beautiful, sexy, confident, conceited, and playful, Morrigan may be called many things given that she is a succubus, but she is not truly evil despite her heritage as a demon of the Makai realm. Instead she is friendly and approachable, perhaps in part due to her frequent visits to the material world to pursue her hedonistic tendencies and has found herself willingly aligned with the forces of good on many occasions. Morrigan is always out to satisfy her hunger and will often shirk her responsibilities as the current head of the Aensland estate to find something more engaging.

In the events of Vampire Savior/Darkstalkers 3 once Morrigan and Lilith fuse back into one, she senses something inside her has changed. In her own ending, she gains a more cheerful and brighter view on the world and feels like she can do anything. In Lilith's ending she feels the desire to wear the Isis Ring, the item worn by those who become the Master of Aensland, and seems to accept her role as ruler of Makai even if she doesn't understand why.

Being known for being born as an S Class demon, Morrigan possesses a vast amount of powers and unique skills and traits; some ranging from teleporting, flying, reshaping her wings into spikes or blades. She can conveniently form a buckler out of her wings to protect herself from oncoming attacks if need be. Many of Morrigan's attacks are strong and can be extremely lethal to her enemies utilizing her own way of hand-to-hand she can do traditional punches and kicks and can use mystic abilities like soul attacks against her adversaries, such as the "Soul Fist". Some of her other traits are accelerated healing, speed, and the ability to create a physical mirror image of herself to aid her in battle. She can use some of her bats as well which are apart of her outfit, and can utilize them to swarm her enemies.

Some of Morrigan's unique powers is the ability to change clothes and hair in an instant and she can steal energy from her adversaries by kissing them. Morrigan's able to sense the magical energy inside a person and can usually see how powerful they are, she also has high reflexes being able to dodge things quickly. Morrigan's stamina isn't invincible, however, she's able to withstand a lot of damage from enemies and usually any attacks that are manipulative or spell related are nullified by her own natural abilities.

As a succubus, Morrigan does need stimulation in order to secrete the liquid that maintains her life force, if she were kept away from any source of excitement, she'd die after two days by lack of feeding.

It is generally said that the Succubus race absorbs the spirit of the opposite sex and uses it as their own energy source. But the succubi that live in the Aensland family are slightly different. They create a special secretion liquid in their body when they are either physically or mentally stimulated. They use this liquid to maintain their life. If one were to be trapped inside a small secluded area, she would die within two days due to the lack of stimulus.

This is because the liquid needed to maintain her life can't be secreted. But to make up for this, they have become able to look into the dreams of others. When no stimulus was given, they evolved other ways to look for excitement. When a creature dreams, a special secretion liquid is formed in the brain. A succubus can take this liquid from the outside. Those who have been robbed feel a strange feeling, as if one's dream was completely taken away. This is quite different from not having any memory of a dream. This liquid, which the succubus robbed, is dissolved into the body of the succubus and is composed.

A novel concept in Japan at the time (1994), succubi were introduced thanks to Capcom producer Alex Jimenez' suggestion during the development phase of the first arcade game. Since the game already had a vampire in Demitri, Jimenez suggested to change Morrigan from a female vampire to a succubus. According to Jimenez, the Japanese staff didn't know what a succubus was until he explained it and they became excited about the change.[2] While not the first worldwide, Morrigan was the first notable succubus to appear in Japanese media, making her the paradigm of the succubus that would be used for reference in future productions.

Among media with succubi that take the vampire motif are Castlevania: Symphony of the Night, Lilim Kiss, Rotte no Omocha!, Rosario + Vampire and The Testament of Sister New Devil. Examples of popular Japanese media that also feature succubi prominently but with a different design, are Good Luck! Ninomiya-kun, Maria the Virgin Witch and Interviews with Monster Girls, all of which came years later after the Darkstalkers series was introduced.

Due to this influence in Japanese popular media, Morrigan is arguably more popular than the Darkstalkers franchise itself to the point where she has had more appearances in other games than the number of existing Darkstalkers games and more than any other character from the series.

Morrigan was a central antagonist in the Darkstalkers' animated series, being forced by Pyron to work under Demitri, who in turn worked under him. In this series, she's a descendant of Morgan le Fay and wants to turn Harry Grimoire into her pupil.

She is also in the Night Warriors: Darkstalkers' Revenge OVA where she travels to the human's cities on the earth. 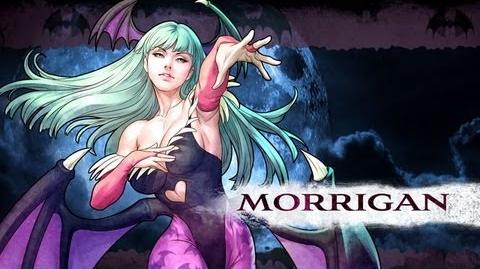 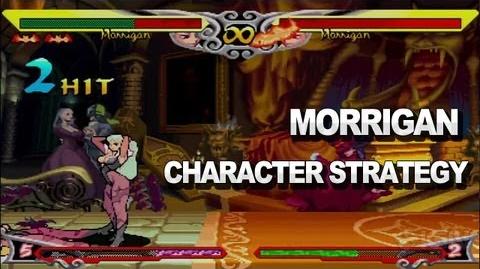 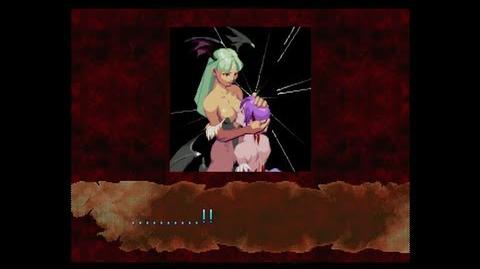 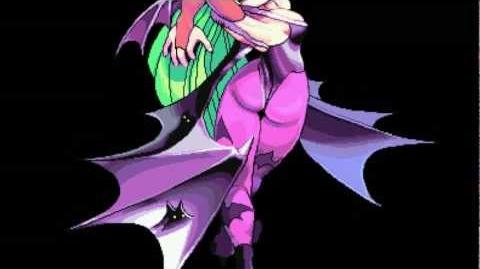