Rin-Rin
Mei-Ling, referred in Vampire Savior and its iterations and in Japan as Lin-Lin (リンリン), is Hsien-Ko's older twin sister. She first appeared in Night Warriors: Darkstalkers' Revenge along with Hsien-Ko. Mei-Ling mostly appears as the talisman in Hsien-Ko's hat, although her human form is also shown in the game after battles and during Hsien-Ko's ending. Like Hsien-Ko, she returns in Vampire Savior. She is voiced by Michiko Neya in the Darkstalkers games.

Mei-Ling and Hsien-Ko were originally born in 1730s China. The twins were born into a line of powerful mystics. When their village was attacked by undead spirits, her mother sacrificed her life to protect them and their village before teaching them the reincarnation spell. However, having being killed by a dark being, her mother's soul became trapped in darkness, unable to pass on, so the sisters decided to use a forbidden spell to turn them into supernatural creatures, Hsien-Ko transformed into a Jiangshi and Mei-Ling into a talisman that prevents Hsien-Ko from going berserk. The twins' transformation allows them to become a Darkstalker Hunter as a combined single unit of mind (Mei-Ling) and body (Hsien-Ko). Hsien-Ko's powers cannot be fully controlled, unless Mei-Ling does so herself as the talisman.

Mei-Ling and her sister eventually succeeded in freeing their mother's soul, but at the cost of forfeiting their own lives into nonexistence as the last portion of their spiritual energy was being drained away. Their mother, finally free from the darkness, spares them from oblivion by using her powers to allow them to reincarnate into newborn twins in a new life as normal girls.

In their new lives, when Mei-Ling and her sister reached the age of 16 (the same age they had in their previous lives before they became Darkstalkers), they discover a special connection that they have after experiencing the same dream on the night of their birthday. Due to this, they gained Jedah's attention and, the next day, they both fell into a coma and their souls were transported into Majigen, where they reawake the powers that they had in their previous lives. With no memories of their past lives, they fight to survive with their new powers. Eventually, they're able to return to their normal lives with the help of the spirit of their original mother.

Like Hsien-Ko, in Night Warriors: Darkstalkers' Revenge, Mei-Ling is a serious person and a prepared mystic driven to rescue her mother's soul. In further appearances, since she is reincarnated in another life, Mei-Ling is a normal teenage girl who is merely in outlandish situations with no knowledge or wisdom from her previous life. (However both Hsien-Ko and Mei-Ling are way older and are fully fledged adults in their Darkstalker forms).

In the beginning, Mei-Ling was planned to be a fighter together with Hsien-Ko as a single character in a similar fashion as Morrigan's "Astral Vision", but this proved too difficult to implement at the time. So, instead, she became a talisman in Hsien-Ko's hat in order to control her powers.

Appearances in other video games

Mei-Ling as Hsien-Ko's DLC costume from Ultimate Marvel vs. Capcom 3

Cover of Vampire Savior: Tamashii no Mayoigo #3, Mei-Ling at the left in the lower half.

Mei-Ling in card of SNK vs. Capcom: Card Fighters

Mei-Ling in card of SNK vs. Capcom: Card Fighters 2

Mei-Ling in card of SNK vs. Capcom: Card Fighters DS 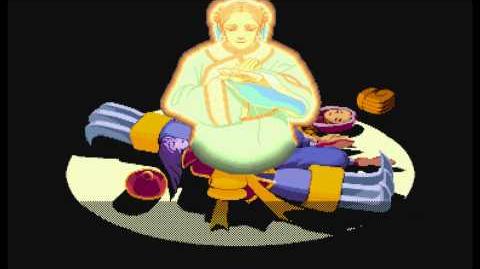 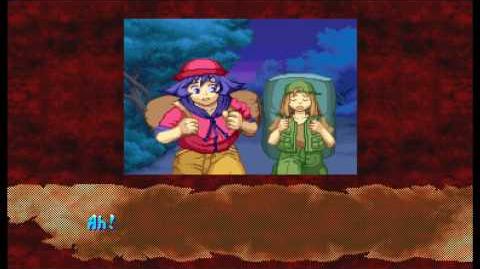