Makai (魔界, lit. "Demon Realm"), sometimes known as Darkrealm in other translations, is a realm that is home to many of the supernatural beings in the Darkstalkers series that is connected to Earth and different realms.

In historical records of Makai, Zeruru Aensland, an ancestor of Belial, was the first supernatural being who respectfully ruled over Makai and its people.[1] This marked the rise of the Makai nobles, and their goals to control different parts of the realm and control over separate regions of the realm such as Jedah Dohma, who had plans to control the realm for himself and control humanity, many supernatural beings were often in conflict with the Makai nobles due to their views for controlling everything and their desire for power, and some left the realm in order to have their control over their own fate, having relationships and families of their own, even with humans.

The realm of Makai was mainly led by three noble families: The Aensland, led by Belial and later Morrigan, the Dohma, led by Jedah, and the Voshtal (ヴォシュタル Voshutaru) led by Galnan (ガルナン). After the fall of Galnan, the oldest of the three high nobles, Jedah had a confidant named Ozom that betrayed him and took his place as the ruler of the Dohma lands, reigning for a time.

It may also be possible to open a portal from Earth that leads to Makai, something that Bishamon has done to find and silence the cursed armor that possessed him formerly, through deep meditation in the mountains.

The beings who inhabit the realm of Makai are full of supernatural creatures of legends and tales such as Werewolves, Vampires, Zombies, Succubi, Shingami, Slorgs, the venomous Pyroghas, Gorgayles, and many more. Some of these creatures are often close with the nobles of the Makai realm, such as the Werewolves, who have a partnership with the Kingdom of the Aesnland family, while the Soul Bee race have an alliance with the kingdom of Dohma.

Many of these are known to prey on hapless souls of humans, particularly the lesser Darkstalkers such as Vampires, given the chance, and they are also those who seek to rule over humans, such as Jedah, but not all of its inhabitants are hostile to mankind.

Known residents of the Makai Realm[]

In Darkstalkers media, a soul is the spiritual energy, life force and source of power of beings. In Makai, power is determined by strength of the soul. When Morrigan was born, she had so much raw power that she was classified as an S Class Supernatural. As a baby, Morrigan could not control these powers because if one does not recognize oneself it is hard to control them, and because of this Belial had to divide her soul into three, keeping only one portion with her and the other two within him and within a different realm. It is that said if she were to be left alone, she would have destroyed everything around her including herself so Belial only planned on her gaining her full soul back when he believed she was ready. The piece of her soul that was within that particular realm had gained a consciousness of it's own becoming Lilith. It is said that because the soul she originated from was so powerful that is why she became sentient.

Lilith was the only piece of Morrigan's soul that was not within a body which could imply that only intensely powerful soul fragments that lack a body for too long are capable of becoming new souls, as there is no mention of the other pieces of Morrigan's divided soul gaining life on their own.

When a divided soul gains sentience, it can be given a separate body by another force. Jedah was capable of giving Lilith a body of her own giving her the form of a miniature succubus. It is unknown if a soul can only gain a body of the original species they came from as it's said that Lilith's form as a succubus is an imitation of Morrigan since she wanted something similar to her original body. The body Jedah gave Lilith was only temporary and if it died she would die as well. A divided new soul gaining a longer lasting or permanent body has still yet to be seen. Even with a newer body of their own a divided soul fragment can still merge with their original body as seen when Morrigan and Lilith fuse in their respective endings. In Lilith's ending she only gets to touch her original body's hand becoming Morrigan's left hand which could mean divided souls can only become the body parts they touch. If a soul is divided, altered or merged in some way the soul or soul pieces change as well. When Morrigan and Lilith fuse, Morrigan's personality changes and gains a new view of life. When Donovan comsumed all the darkstalkers in his ending in Vampire Hunter or Night Warriors: Darkstalkers' Revenge, it is implied that he may end up consuming the darkness of all of those he hunted and his soul became fully corrupted and succumbed to his vampire half.

Souls from even those born as full or normal humans are capable of becoming darkstalker souls or an equivalent to it. This can either be by becoming an actual darkstalker in some way or just the soul itself becoming corrupted. A great example would be Baby Bonnie Hood who is a human being but is said to have the soul identical to a darkstalker which caused Jedah to detect her as what he considers a worthy soul. A "worthy soul" to Jedah is just what he considers fitting for his new dimension but because of how he detected a human with a dark soul and confused it for an actual darkstalker it is most likely that even a powerful S Class darkstalker can get confused on what species the soul can come from. It is unknown if an S+ Class darkstalker can already tell the difference but because of how powerful Belial was and was said to have "omnipotent foresight" it is possible they can. B.B. Hood's soul was filled with such darkness which explains how even as a normal human she can be at the same level with powerful darkstalkers. It is unknown if B.B. Hood's title as an "Special S Class Hunter" is equivalent to being an S Class darkstalker in terms of exact levels of power but with how she has the possibility to put up an equal fight against beings like Jedah and Morrigan it is possible. Her stare alone is said to strike fear in lower class darkstalkers.

One of Jedah Dohma's winposes has him slice the defeated opponent in half and collect their soul. In this animation it is shown that the soul takes the form of an orb and is located in the body's abdomen. The soul becomes covered in blood in Jedah's win pose which shows that they can still be covered by tangible objects, but because Jedah's blood is supernatural in nature it is likely that only supernatural matter is capable of touching souls. In his move Prova di Servo, after slamming his opponent on a contract to collect their soul, it is shown what a soul looks like without blood on it. Souls are colorized as blue with white on the inside.

Outside the games, souls tend to be colorize differently. As 1/3 of a soul, it is possible that Lilith's form as a divided soul was either a smaller version of this spiritual orb or a "pie slice" of it, indicating that its only a mere fraction of a fuller object. Some adaptations of Darkstalkers also visualize her as a smaller orb sometimes with a flame-like appearance.

Many creatures of Makai need to devour souls as a food source or gain power such as succubi, soul bees, ghouls/zombies or other supernatural beings. Some creatures will prefer the souls of specific species or souls considered "darker"/"lighter", while others will be nearly indiscriminate such as soul bees who will go after anything but their own kind. Other supernatural creatures, like vampires, will go after more physical things such as blood, but it is unknown if those things are entirely linked to the soul, or are more similar to how humans and non-supernatural animals need physical food. Donovan's seems to get more and more corrupted by the amount of bloodshed he causes, proning him to become insale to the blood. As a result, it is likely that it could be the former.

Ancient writings of the realm states that Makai was created from a supernatural being who appeared where there was nothing. Every creature in this realm are descendants of this being, and that Makai itself is a deity.[1]

The realm of Makai is made up of a continent known as Matairiku (魔大陸, lit. "Demon Continent"). Matairiku is several hundred times larger than the combined area of the Earth's continents. In middle of the continent, an 8,000 km (4.97 mi) high mountain range sits with a 3,000 km (1.86 mi) high waterfall known as the Sky to Ground, According to the UDON Comics, the realm of Makai is not only connected to the Human Realm, but to an infinite number of space-time continuums.

The ocean that surround Matairiku have an immeasurable area. The ocean that lies on the eastern side of the continent is Daimakai which is a sea of fire that can reach over 10,000 degrees Celsius (18,032 degrees Fahrenheit). The ocean in  the western side of Makai, Daimayou is opposite of Daimakai and is made up of ice. Where the two oceans meet, there is a gap enclosed by the wind, lighting and thunder. In the outer expanse of the oceans, a wall of compressed air makes further travel nearly impossible. A forest of plants trees are large and living in this realm, there is an group of seas of of Acid located at the forest of the Soul Bees, Cursed Dragon Glaciers of the South, and the Fire-Mountains where another kingdom exists.

The realm of the Makai scriptures states that beyond these oceans are rifts that lead to separate realms, dimensions and parallel instances. No supernatural being has have traveled beyond the oceans, so there is no proof of this by the beings who live in the realm of Makai. 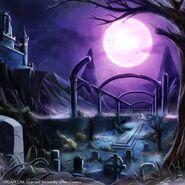 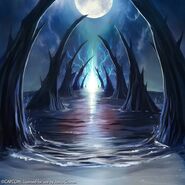 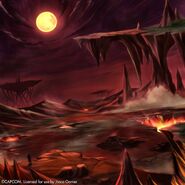