Majorette first appeared in Udon Comics' Darkstalkers: The Night Warriors, volume 2 and was designed by Jeffrey "Chamba" Cruz. When she was first introduced she mentioned her hate for cats of any color with exception of black, with white cats being her least favorite of all. She was accompanied by Thomas, a Catman whose fur is black. Her only appearance has been in the second issue of the Darkstalkers: The Night Warriors comics and she is currently only canon to Udon's comics. She has not made an official or canon appearance in any Capcom games.

During Udon's Night Warriors run, several new characters were introduced who were not in the original Darkstalkers series. In the first issue of Night Warriors, Udon introduced Dr. Varvle and his assistant Thornton. In the second issue Majorette, a witch, appeared along with Thomas. She's introduced very suddenly, randomly firing bolts of magic at every cat she sees, expositing that she hates all cats except her own. She then sees Felicia, who is in her cat form, on top of the train and attacks her, saying she hates white cats the most. After a single-page fight with Felicia, she retreats after Thomas is scared off by Jon Talbain. She's never seen again after this scene.

Thomas shares many similarities in design to Felicia. In his human-esque form, he has forearms coverd in fur with paws for hands. Unlike Felicia, the inside of his ears are blue instead of pink. Unlike Felicia he has a fear of dogs or werewolves, as shown in the comics when he runs away from Jon Talbain. Like Majorette, he has yet to appear outside of the Udon Comics' series and his human form is only seen in one scene of the comics.

His existence is also extremely contradictory to the lore of all other Darkstalkers media, where catmen do not and cannot exist.

Majorette was created by Udon's Jeffery Cruz. He originally draw several outfits for her along with hair colors and styles where they created a character by using what could be equated to a paper-doll system. 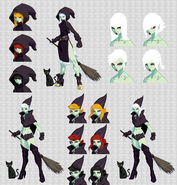