Start a Wiki
Lord Raptor or Zabel Zarock as he's referred to in the Japanese version of the series, is an undead rock star. He has appeared in the Darkstalkers series since the beginning and in every sequel and upgrade since. Outside of Capcom's own franchises, he has appeared in Namco x Capcom and Project Cross Zone. 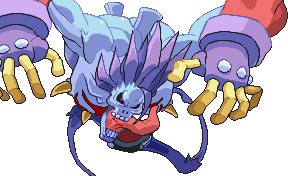 All of Raptor's winquotes are consistent across Japanese and English, with only modifications to fit letter limits, or to make it fit with his character more.

Retrieved from "https://darkstalkers.fandom.com/wiki/Lord_Raptor/Quotes?oldid=13395"
Community content is available under CC-BY-SA unless otherwise noted.