In Vampire Savior, Lilith serves as the boss battle for Morrigan as well as the special mid-boss fight for Victor von Gerdenheim. She was originally voiced by Hiroko Konishi with Miyuki Sawashiro currently voicing her in Onimusha Soul.

Morrigan was a very special Succubus, even within all of the Darkstalkers. She was born as an S Class noble. But at that time, roughly 300 years ago, a struggle for power had already started. Various battles had occurred in various locations. It was unacceptable for a Succubus child to be given rights to power at the time. The problems didn't end there, either. Morrigan had no way to control the enormous powers that she held within. If she were to be left alone, she would destroy herself and the land around her. Belial decided to split her powers and isolate them to protect her. Morrigan's soul was split into two; one half being closed off into a space that Belial had created.

But her powers weren't simply split evenly. Because her powers were forcefully divided, they kept drawing each other with a powerful force. To control this, Belial took another part of her power and sealed it within himself. Thus, Morrigan's soul had been divided into three. One in Morrigan, one in the sealed space, and one in Belial's body. When these become one, Morrigan can regain her full power. But if one doesn't recognize their own ability, it is difficult to sense one's own existence, let alone control it. Morrigan herself found out about her other half after Belial had died.

When Belial died, the sealed off power was supposed to return to its rightful owner. Once this was complete, the next ruler of Makai was supposed to be born, as Belial foresaw it. But even though Belial's demise has resulted in Morrigan reclaiming her power, she feels it has not returned to her completely, unaware of the third partition of her soul. All this was due to a certain accident that had occurred in the sealed space that even Belial himself did not notice.

The sealed off power had begun to have its own will. This new soul, calling herself Lilith, had began to recognize herself roughly ten years after the sealing. It was Morrigan's heart which slipped into Lilith's consciousness, although Morrigan herself never noticed this. As Lilith found about Makai, her feelings grew. These feelings were different from normal emotions like admiration and jealousy. They were closer to a primitive instinct to want to go back to its home.

In Makai, power is indicated by the strength of the soul. If a soul is forcefully divided, it is not surprising that the soul will try to return to its full self. Morrigan's soul was powerful enough that it was able to produce a will of its own.

Due to Jedah's plot, Lilith was able to attain a body. In return, Lilith was to lure Morrigan and the other Darkstalkers. Morrigan's true powers were something that Jedah could not overlook. It's unknown if Lilith understood Jedah's intention and the meaning of his salvation, but Lilith enjoyed her new found freedom. To Lilith, the Majigen was a real world that she was able to be born in. Her enjoyment will last as long as she can fight someone who can satisfy her curiosity, and be able to somehow return to her true body. She is like a child who doesn't know the true darkness yet, but is also very potently powerful.

It is generally said that the Succubus race absorbs the spirit of the opposite sex and uses it as their own energy source, however the succubi that live in the Aensland family are slightly different. They create a special secretion liquid in their body when they are either physically or mentally stimulated. They use this liquid to maintain their life. If one were to be trapped inside a small secluded area, she would die within two days due to the lack of stimulus.

This is because the liquid needed to maintain her life can't be secreted. But to make up for this, they have become able to look into the dreams of others. When no stimulus was given, they evolved to look for other ways to look for excitement. When a creature dreams, a special secretion liquid is formed in the brain. A succubus can take this liquid from the outside. Those who have been robbed feel a strange feeling. As if one's dream was completely taken away. This is quite different from not having any memory of a dream. This liquid, which the succubus robbed, is dissolved into the body of the succubus and is composed.

Their blood and saliva has a powerful lustful effect. Their body odor causes their blood vessels to dilate and causes a large amount of perspiration. If a man is confronted by a succubus, unless they have a very strong mind, they would instantly be under her spell.

The succubus race lives about 400 years. Roughly ten years after they are born, they gain their adult appearance and keep this beautiful form until they die. Their beautiful appearance is kept intact even when they are old. Over the past several hundred years, their ability to reproduce has been in danger. The amount of spirit that can be taken from an individual is limited. Their search for new dreams have caused them to reach into the human world. But it is becoming more and more difficult to reach a good amount of nutrition. When Morrigan became the successor of the Aensland family, there were roughly only 200 Succubi left. At this rate, the Succubus race would disappear after one or two generations. However, the Succubi themselves do not care about the crisis and are enjoying their everyday lives.

About incubi in Darkstalkers

The Incubus race is said to be the opposite race to the Succubus race. The Incubus is not simply a distinction like a male and female in a race but a completely different race. Although they are treated as a lecherous race like the succubus, they are quite different. First off, their physical looks are not all handsome men, unlike the succubus where they are all beautiful women.

Many of the Incubi are inhuman and may have four feet or may be dragon types. 60% of the Incubus race is made up from these types. They have a powerful aphrodisiac digestive fluid in their body and they pour this into their victim. This fluid causes the victim's elements inside to change and becomes a very efficient food type for them. This method is similar to an insect or an animal. They prefer women because they are a better food type than men. They only eat men when they have to.

Lilith takes her name after the first wife of Adam who was said to suck the blood of infants and from whose name the word Lullaby (Lili Abi) is supposed by some to have been derived. She was long regarded as the Queen of the Succubi.

In medieval European folklore, a Succubus is the female variety of an Incubus, the word Incubus being Latin for nightmare. According to one legend, the Incubi and the Succubi were fallen angels. The ordinary phenomenon of nightmare, as the name imports, was associated with their belief. The Succubus is a female demon or evil spirit who visits men in their sleep to lie with them in ghostly sexual intercourse. The man who falls victim to a Succubus will not awaken, although may experience it in a dream. The very word Succubus is derived from the latin word Succuba meaning "strumpet" or "prostitute" (from the verb Succubare - "to lie under").

During these times, consortion with demons was long one of the most ordinary accusations in witch trials. Morrigan's date of birth coincides with the first appearance of a Succubus in Scotland. Although the appearance of Succubi were comparatively rare to that of the Incubus, there are anecdotes of a priest who had commerce with one for more than forty years and another priest who found a faithful mistress in a devil for half a century: They were both burnt alive.

In the real world, Incubi were supposedly more common than their female counterparts. Hundreds, perhaps thousands, of women were burnt on account of the belief of consortion with an Incubus. The very word Incubus is derived from the latin verb Incubo, Incubare - "to lie upon". It was observed that they had a peculiar attachment to women with beautiful hair, and it was an old Catholic belief that St. Paul alluded to this in that somewhat curious passage, in which he exhorts women to cover their heads, because of the demons.

The Incubi generally had no children, but there were some exceptions to this rule, for Nider the inquisitor assures us, that the island of Cyprus was entirely peopled by their sons. Should the female victim get pregnant, the child would grow inside her as any normal child, except that the child will possess supernatural capabilities. Usually the child grows into a person of evil intent or a powerful wizard. Legend has it that the magician Merlin was the result of the union of an Incubus and a nun.

In the early stages of development, Lilith was quite different from her current form. According to rumors, she was supposed to be called Genevieve; and was Morrigan's older sister at first and had the blood of angels mixed in her. She had angel wings on her head but this was always folded to hide them due to her being a darkstalker. Physically, she looked like Morrigan. She was always picked on by Morrigan as a child. But this was cut because there were enough angel types in games. Her next design was much closer to the current Lilith, the only difference being that she was either a male or a hermaphrodite.

Some of her angelic motif related to light survived in her moveset, becoming light counterparts to Morrigan's dark-themed move sets. 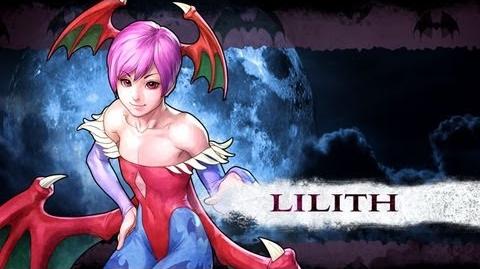 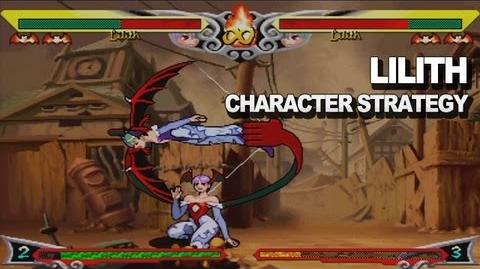 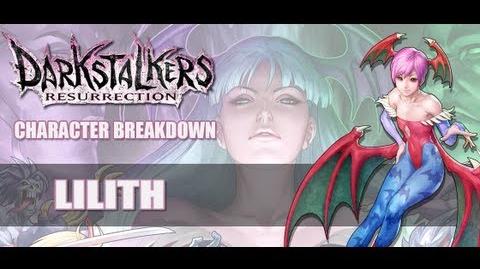 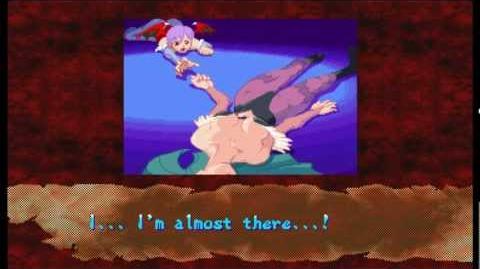 Retrieved from "https://darkstalkers.fandom.com/wiki/Lilith?oldid=17482"
Community content is available under CC-BY-SA unless otherwise noted.