Lilith made her debut in Vampire Savior, often referred to as Darkstalkers 3 outside of Japan. She has not made a playable appearance in a fighting game since her debut but an alternate version of Morrigan Aensland with a color pallet resembling Lilith's is unlockable in original Marvel vs. Capcom.

Many of Lilith's quotes make reference to her being a part of Morrigan, and much like the latter, have quotes that are sexually suggestive. 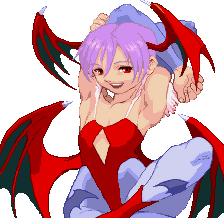 Lilith's winquotes are mostly consistent across Japanese and English, with only modifications to fit letter limits, or to make more sense in English. Only one does not have a true English equivalent.