Felicia was first introduced in Darkstalkers: The Night Warriors as one of two female characters alongside Morrigan Aensland. She has appeared in every game in the series and in numerous cross overs including Marvel vs. Capcom 2: New Age of Heroes along with Morrigan, Baby Bonnie Hood and Anakaris.

Felicia is a Catwoman who was taken in and raised by a Sister named Rose who gave her the name Felicia from the word Felicity. Despite her identity as a Darkstalker being exposed, she was not turned away by her as Felicia had feared. When Rose passed away, Felicia left her town hoping to be a musical star.

She knew that the outside world was not pretty as it was filled with much prejudice towards Darkstalkers for being different. Despite this, Felicia never lost hope, as she remembered what she was told before that one has to obtain happiness on their own. She wishes there to be a way for peaceful coexistence between Darkstalkers and humans alike. For that, she pursues her dream of becoming a famous musical star to serve as a bridge between the two races.

During her travels, she met many other Catgirls of her kind. With her newfound friends, she set out for her dream of being on stage. Eventually, she and her friends successfully started a musical with Felicia being the main star after being scouted by a talent agent.

In the events of Vampire Savior, she wondered about how she could make others happy. In her ending, she constructed an orphanage named the 'Felicity House'.

She is an energetic and optimistic catgirl who enjoys singing, dancing and making friends with people. All she wishes for is peaceful coexistence with humans and doesn't resort to fighting unless she cannot avoid it. Because of this, she stands out among all the other Darkstalkers, many of whom are antihero at best. Her nice attitude has made some people tolerate Darkstalkers more and this gives her more motivation to persuade more humans to accept them since Felicia loves humans due to their personalities and open-mindedness. Despite some humans not accepting Darkstalkers easily, she doesn't give up her passion to make friends with the ones that care.

Also, Felicia surprisingly likes dogs, as shown in her intro against Amaterasu in Marvel vs. Capcom 3, where she tells Amaterasu to play with her and theres a quote where she asks for Amaterasu to forgive her.

Being a Cat and human hybrid, Felicia has abilities corresponding from both; she's one of the fastest Darkstalker characters and most agile being able to do flips, jumps, including fast lunges and leaps off walls and people. Most of her attacks are fierce and she utilizes her claws for damaging effects on her enemies, usually scratching and striking them with her hands and feet. While Felicia's not as strong as other Darkstalkers she's still capable of lifting humans and some objects heavier than her; one minor ability she can do is turn into a cat.

Felicia isn't lacking any power. However, her kind demeanor can be seen as a weakness and her enemies can take advantage of this if she drops her guard.

Curse of the Cat Woman

In 1967, the same year chosen as Felicia's birth year, Edward Field wrote the poem Curse of the Cat Woman.

It sometimes happens that the woman you meet and fall in love with is of that strange Transylvanian people with an affinity for cats.

You take her to a restaurant, say, or a show, on an ordinary date, being attracted by the glitter in her slitty eyes and her catlike walk, and afterwards of course you take her in your arms and she turns into a black panther and bites you to death.

Or perhaps you are saved in the nick of time and she is tormented by the knowledge of her tendency: That she daren't hug a man unless she wants to risk clawing him up.

This puts you both in a difficult position-- panting lovers who are prevented from touching not by bars but by circumstance: You have terrible fights and say cruel things for having the hots does not give you a sweet temper.

One night you are walking down a dark street And hear the pad-pad of a panther following you, but when you turn around there are only shadows, or perhaps one shadow too many.

You approach, calling, "Who's there?" and it leaps on you. Luckily you have brought along your sword and you stab it to death.

And before your eyes it turns into the woman you love, her breast impaled on your sword, her mouth dribbling blood saying she loved you but couldn't help her tendency.

So death released her from the curse at last, and you knew from the angelic smile on her dead face that in spite of a life the devil owned, love had won, and heaven pardoned her.

In Japanese only games:

Felicia was a central protagonist in Darkstalkers the Animated Series, who, with other Darkstalkers such as Jon Talbain, Rikuo and occassionally Donovan Baine, fought against Pyron. Rather strangely, the show portrayed her as a centuries-old shapeshifter wearing a costume, rather than an actual catwoman. She also appears in the Night Warriors: Darkstalkers' Revenge OVA, as the lead of one of the three major plotlines of the miniseries. 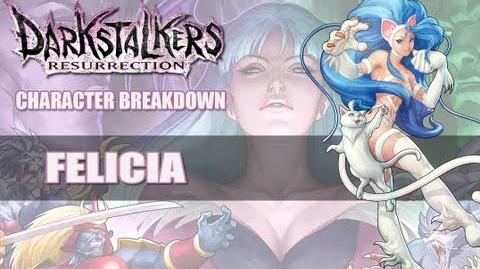 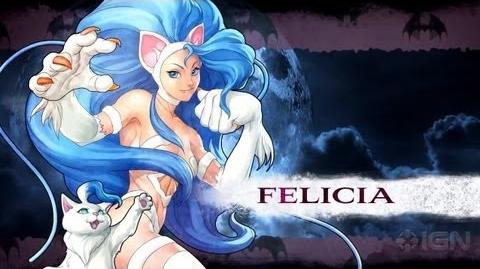 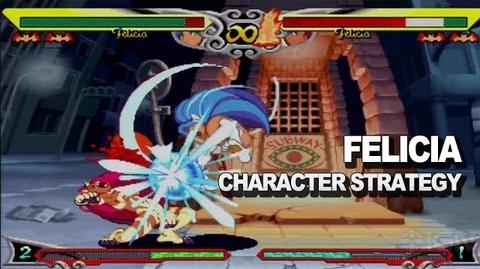 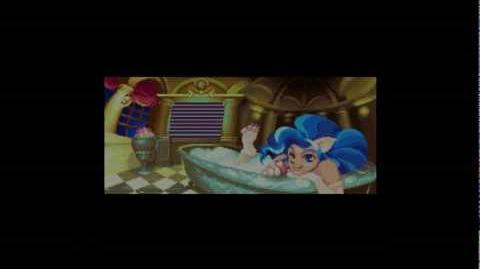 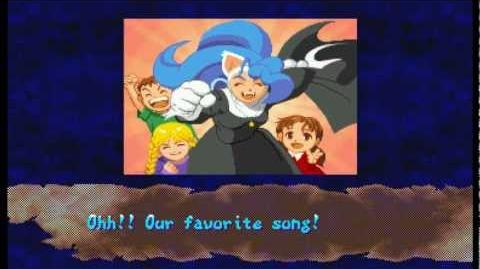