The Demon Flytrap, or Diabolus Dionaea muscipula, is a species of demonic plant native to the Makai, featured in Udon Comics' Darkstalkers: The Night Warriors issue 01. They hunt by generating a hallucinogenic pheromone that makes them temporarily irresistible to their prey, making them believe said prey is everything they could ever want in a mate.

Dr. Varvle Mattlayer and his assistant Thornton witness a Demon Flytrap hunting a Soul Bee in this manner. While it managed to ensnare her in its jaws, the Soul Bee fought back and managed to escape. However, it then turned its attention to Varvle, appearing as a female demon to seduce him, though the issue ultimately leaves Varvle's fate uncertain. 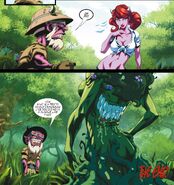 The Demon Flytrap preying on Varvle Mattlayer.
Add a photo to this gallery
Retrieved from "https://darkstalkers.fandom.com/wiki/Demon_Flytrap?oldid=17367"
Community content is available under CC-BY-SA unless otherwise noted.