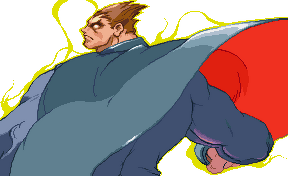 Demitri's winquotes are mostly consistent across Japanese and English, with only modifications to fit letter limits, or to make more sense in English.