Dee is character who appeared in Donovan's Night Warriors: Darkstalkers' Revenge ending but has only appeared as a playable, secret, character in Vampire: Darkstalkers Collection; a Japanese only release.

Dee's design was originally created for an unused Donovan ending in Vampire Savior, and was at one point intended to appear as an alternate playable version of Demitri, but the idea was ultimately rejected.

In Vampire: Darkstalkers Collection he was incorporated as a secret playable character in the "Arranged Versions" of Vampire Savior. Dee's sprites are edited from Demitri and incorporate elements taken from Donovan. He essentially plays like Donovan with more powerful moves and a mix of Demitri's moves with a new projectile attack.

Dee's ending also features an adult version of Anita, another scrapped playable character concept for Savior dating back to the development of Vampire Hunter. The art for Dee's ending originates from sketches for unused endings for Donovan and Jedah in Savior which would have featured Donovan succumbing to his darkness but regaining his humanity moments before killing Anita, and Anita being absorbed into Jedah.

He has not made any other game appearance aside from the aforementioned game. However, he is seen in some comics, particularly Street Fighter vs. Darkstalkers, Teppen the App Capcom Games and even figurines.

In his ending in Night Warriors: Darkstalkers' Revenge, Donovan finally loses his humanity as he sacrifices himself somewhat in order to protect Anita as well as awaken her emotion again. Although Donovan is victorious, he succumbed to the dark part of his soul too much in order to do so. This tragic turn of events causes Anita to cry, and is symbolic in showing that Anita is finally whole again. Years later, a grown Anita wonders what became of Donovan, and she hopes he's okay. Sadly however, we find Donovan sitting on a throne, beside many bodies. He is fighting a never ending struggle with himself as he yearns for inner peace.

Dee is the true, present day Donovan, somewhat corrupted and a "what-if" character, if his Vampire Hunter ending was indeed canon. In Dee's ending, he confronts Anita, who shows her true form and he begins to fight an aged Anita. The outcome of this fight isn't shown but during the credits various pictures are shown of aged Anita visiting a grave. It is assumed that the grave is Donovan's and that she won the fight and killed him, and it is still unknown whether this is a canon event or something of a "what if."

If Donovan was the hunter of the dark, Dee is the result of Donovan having succumbed to the darkness within, as he himself is a Darkstalker too. He becomes a pessimistic, tragic, and borderline suicidal warrior who wants nothing but eternal rest, to put an end to his own agony of becoming a paradox of his own existence. This is in sharp contrast to his original self, who fights for the sake of mankind, seeing the battle through as a paragon of goodness and justice. Based on his translated winquotes, he retains some of his old self's duty to put an end to the Darkstalkers, but does so in a bleak, doubting and subdued tune.

Dee seeks Anita out for yet unexplained reasons, with the result being his implied death. There are no indications of resentment between him and Anita and it is often assumed she knew of his darker half all along and possibly destroyed him out of mercy or duty.

After unlocking and selecting one of the arrange versions of Vampire Savior, Vampire Hunter 2 or Vampire Savior 2, highlight the random select box on the character select screen and press "select" 9 times and then press any punch or kick button.

Concept art for Dee's versus portait, finalized as his character select portrait.

Concept art of Dee from an unused Donovan ending.

Concept art of Dee from an unused Donovan ending.

Dee in Street Fighter vs Darkstalkers

Dee from Darkstalkers in Teppen

Versus portrait of Dee

The costume colors of Dee 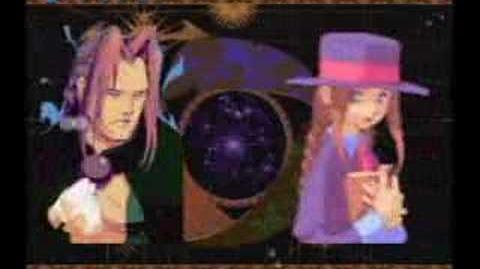