Dāku Garon
Dark Talbain, also known as Dark Gallon (ダークガロン, Dāku Garon) in Japan, is the cursed side of Jon Talbain. He first appeared as the boss for Jon in Vampire Savior and was also a hidden playable character in that game. Just like Jon, Rikuo and Sasquatch, Dark Talbain is not featured in the arcade release of Vampire Savior 2.

One of the key differences between Dark Talbain and Jon's sprites are the colors. Dark Talbain appears as if he has a glowing aura, with flickering colors. While most of the cast have six different costume colors, Dark Talbain is limited to only two. His intro pose features him appearing out of almost nowhere while Jon's has him transforming from human into werewolf. Another difference is their "Dragon Cannon" animations. Dark Talbain's "Dragon Cannon" reuses Jon's old animation from Night Warriors: Darkstalkers' Revenge, which has one large wolf-like head shooting towards the opponent; Jon's Darkstalkers 3 "Dragon Cannon" features several wolf heads.

Both characters do share the same portrait and victory artwork, with Dark Talbain's recolored to match his sprite. Most of their animations remain similar as well, and even shares the same ending.

To select Dark Talbain, hightlight Jon Talbain on the character select screen and hold Select and press the three punch or kick buttons at once. An alternate way to select him would be to change the option settings to "Shortcut = on", highlight Talbain and hold Select, then press any attack button.

To select Dark Talbain in Darkstalkers Resurrection, highlight Talbain on the character select screen and while holding Select, press any punch or kick button. 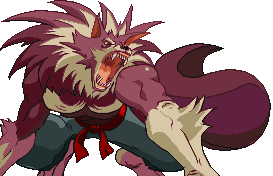