Start a Wiki
watch 01:51
'Darkstalkers Resurrection' - Bishamon Trailer
Do you like this video?
Bishamon

Outside of video game series, Bishamon has appeared in the American cartoon series Darkstalkers as well as the second episode of Night Warriors: Darkstalkers' Revenge - The Animated Series. Similarly to the Night Warriors Animated TV series, he appears in the UDON comics and fights against the Darkhunter, Donovan Baine.

When Bishamon was looking around in an antique shop for his people, as if drawn by fate, he found a piece of armor and a sword. At this moment, he lost his own thought. When he realized where he was, he was at his house. The armor and sword sitting beside him. When he went back to the store to ask what happened, he found out that he forced the owner to give the armor and sword to him. Bishamon himself had no memory of this. It made no sense to him but as he stared at the armor, it felt meaningless to him.

At the time, his wife Orin worried about Bishamon as he sat in front of the armor for days. She asked him to let go of the armor and sword. Two weeks later, he decided to wear the armor to find out what happened to him.

The moment he wore the armor, he felt its magic corrupting him. But he realized that everything was too late and screamed with his last bit of strength, "Run......Run, Orin!!!"

Bishamon's mind was corrupted by its dark magic. He had donned Hannya, the armor of hate and Kien, the blood sucking sword. He went on countless days of battle as Hannya demanded more sacrifices.

When Bishamon had fought against Pyron, Pyron's energies caused Bishamon to be separated from Hannya's curse. He and his wife became monks. The practice he had started was called roppoudou. This practice gave its followers a strong mind and would cleanse the followers' mind and spirit of impurities. Traveling throughout Japan brought peace to his heart again.

Several years later, he had stopped by an old temple. There, he found writings about a realm known as "Makai". Within these writings contained drawings depicting the armor, "Hannya", and the sword, "Kien" and other creatures similar to those in the drawling. Bishamon thought to himself, a person like himself may appear again. He wanted to prevent a similar curse from happening again to a fellow warrior. He had already felt the dark magic of the armor, he had to seal it away.

To make contact with the realm of Makai, he secluded himself within a deep snowy mountain. He sat down and held the shakujou, or monk staff, and started to meditate. When his spiritual strength had reached it's peak, he could sense a different realm of supernatural beings. He was determined to seal the armor back to the realm.

At the same time, Hannya had started to thirst for blood once again. Even without having a host, the armor and sword started to move again. They gathered all the souls who had this armor on them to create a body and moved out to hunt. When Hannya and Kien moved out, they were sucked into the realm of Majigen. But before Hannya could kill, Bishamon had caught up to him and sealed him away. After these events, Bishamon had returned home and to his peaceful life with his wife.

Due to the sword and armor's influence, Bishamon's mind is plagued with darkness as he lusts for more destruction. Despite this accursed power, Bishamon still cares for his beloved wife, Orin, so much that he used every last bit of his strength to stall the armor from striking his wife, giving her the chance to escape with her life.

As a noble and honorable samurai, Bishamon feels shamefully responsible for the countless kills that the cursed sword and armor made him do to innocents. To atone for this. he and Orin became ascetic monks to seek redemption.

He is determined to prevent a repeat of what happened to him, and seeks out to seal Hannya and Kien in Makai to prevent the accursed articles from plaguing the world.

The armor gives the user many supernatural abilities such as the power to make many versions of oneself, sensing different energies from afar, absorbing the souls of humans through combat, and enhanching a user's strengh and speed.

This armor was maded by a Makai beast that was a servant of Jedah Dohma, It came into the human world roughly 600 years ago. Oda Nobunaga had also worn the armor, though its appearance was different. The armor would grant its host supernatural abilities, but in return would turn them into a monster. It would shine brighter the more powered it showen, the host wearing it would slowly lose their soul.

After the age of war had ended, it would travel using antique shops to find new people for it to wear.

In the 1580's, a sword was forged in Makai by the name of "Onikiri" that was sent into the human world by Jedah Dohma. As a sword is used to cut a human, its edges would dull because of the blood within the body of a human. But the Onikiri became sharper as it cut more people due to the way its edges were made. People feared the sword due to the illusion that it would suck into a human body. It was said that if the user did not kill, the sword would cause it's user soul to be lost.

After the time of peace had come, the Onikiri had disappeared for roughly ten years only to come back in a set with Hannya. By this time, it had already been affected by the magic of Makai, and had changed its own name to "Kien." The cause is unknown.

When the Shogun ruled Japan, Samurai became the heroes of Asia. The most skilled Samurai became legends. However, this made lesser skilled warriors jealous and zealous to become legends as well. There is an ancient legend of Myth that says an Evil Sorcerer took advantage of this jealousy. He sought out a handful of the most skilled, but under appreciated, samurai warriors in all of Asia. He offered them a deal. He would give them enhanced abilities and great skills which would make them legends for their souls and the souls of their offspring. It is said that more than a few samurai were willing to trade their souls for fame and glory.

These men became known as the soulless Samurai. They were unstoppable in battle, but they found that no fame or fortune was worth the price of their souls. At anytime he wanted to, the sorcerer would remove their soul. A body without a soul, as these warriors soon discovered, is transformed into absolute evil. These soulless samurai became Wraith-like creatures with an unquenchable thirst for battle. While they had their souls, they were legendary warriors of asian that people dreamed of. With their souls removed, they became a demon that tormented the nightmares of peope.

In a later period, Asia had changed and there was no longer any need for the warriors of old. With Asia united and enjoying peace, the respect the samurai once enjoyed turned to contempt. It was made illegal for the peasantry to carry a sword due to how dangerous they were. Many samurai tried to rebel, but found that sword-wielding Samurai were easily crushed by Gun-Toting Policemen. Many of these Samurai went into hiding and formed secret societies. But, even among the most secret societies, the Cursed Samurai who had sold their souls for fame were outcasts.

Many of the other warriors thought it a great honor to eradicate these demons, the Cursed Samurai. They hunted these Ronin and killed any of their offspring they could find. Soon these families went into hiding. They formed a secret society to pass the knowledge and skills they had learned on the battlefield down to others, so that they might be strong enough to overcome the terrible curse their forefathers brought on them.

It has been said that the Sorcerer told the Samurai that if they were to find the greatest warrior on earth and defeat him in a fair fight, they would win back their soul. It is believed that they have been searching for the world's greatest fighters for centuries.

In Japan, tsukumogami, literally "artifact spirit", are items that has come to life over the period of 100 years. Depending on the condition and what kind of object it is, tsukumogami can either be good in nature, or outright evil. When tsukumogami awaken, they manifest a face on themselves, which depends where a face can be properly placed, and or limbs to move around with. 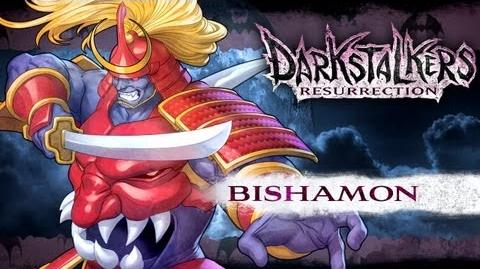 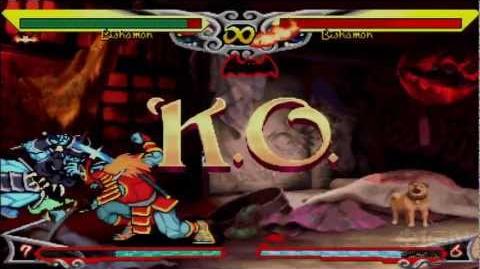 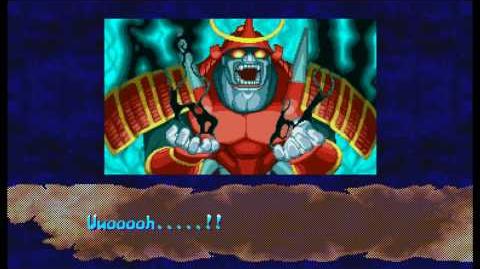 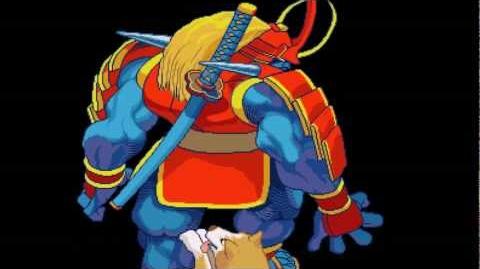 Retrieved from "https://darkstalkers.fandom.com/wiki/Bishamon?oldid=17801"
Community content is available under CC-BY-SA unless otherwise noted.