Baby Bonnie Hood, commonly referred to as B.B.Hood or Bulleta in the Japanese series, was first introduced in Darkstalkers 3 (Vampire Savior in Japan). Since her first introduction she has only made an appearance in one other fighting game as a playable character, Marvel vs. Capcom 2. She has made cameos in other games.

Her quotes tend to imply the innocence of her outward appearance with the darkness of her soul. 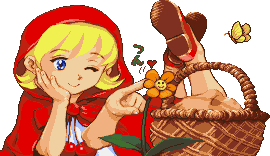 Bonnie's winquotes are mostly consistent across Japanese and English, with only modifications to fit letter limits, or to make more sense in English.

The Match of the Millennium: SNK vs. CapcomEdit

Retrieved from "https://darkstalkers.fandom.com/wiki/Baby_Bonnie_Hood/Quotes?oldid=13389"
Community content is available under CC-BY-SA unless otherwise noted.