Anakaris has appeared as a playable character in every Darkstalkers game. He also appears in Marvel vs. Capcom 2 and Capcom Fighting Evolution. 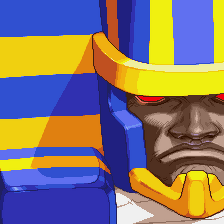 Because Anakaris' quotes can be somewhat too cryptic and at times, culturally incompatible, many of them have been reworded or outright changed. One of them is also a fourth-wall breaker, like Felicia's.