Anakaris (アナカリス, Anakarisu) is a fictional character in Capcom's Darkstalkers series. His first appearance was in Darkstalkers: The Night Warriors and he has appeared in every Darkstalkers game since. He is the only character in the series without a regular throw and the ability to perform a push block in Vampire Savior: The Lord of Vampire and its updated titles. He is well known for his attack, Royal Judgement (originally Pharaoh's Curse, also known as Royal Curse), that transforms characters into small, helpless versions of themselves.

Outside of the Darkstalkers series, Anakaris has appeared in Marvel vs. Capcom 2. He would also make an appearance in Capcom Fighting Evolution along side Demitri Maximoff, Felicia, Jedah Dohma and Pyron. In UDON Entertainment's Darkstalkers: The Night Warriors issue one comic, he is seen fighting a Huitzil.

He was designed by Object and Effects designer Takenori Kimoto, also known as "Kimo-Kimo". He would often create many sprites for Anakaris that gave trouble to the developers when trying to include them as attacks or poses. Nevertheless, practically all of these sprites appear in the last installment, Darkstalkers 3 as fan-service for the players.

Anakaris is a strong willed, prideful person who cares about his people and empire, he holds respects for good rivals and people with strong spirit and will that dare to challenge him. As a Pharaoh, he views himself as the embodiment of god, a messiah, and a good king. In fact, he believes in justice and bring salvation to all of his followers, as noted in his winning quotes. He has always a somber mood, but acts calm and confident.

The 12th Pharaoh of a great Egyptian empire. He became Pharaoh at the age of 12. Foreseeing his revival, he had a pyramid and a sanctum created for his return. Five thousand years later, he was brought back to life by a supernatural force when Pyron invaded Earth. After the battle, he traveled five thousand years back in time to fight and defeat the invaders of his empire.

Once his kingdom was saved, he heard a voice from the far future. He traveled to the present time and entered the Majigen (a realm created by Jedah). While fighting there, he learned that the destruction of his kingdom was unavoidable. In order to protect it, he then returned to his kingdom and took his people to another realm so that they may be free from the dark wars of Earth.

These are the words Anakaris spoke when he became the pharaoh. It can be seen that he had already possessed overwhelming charisma and leadership. "Ultimate and immortal. The only and absolute. I am the true king of this golden kingdom which shines brilliantly. Anakaris the first. Those of you who kneel to me are granted the right to be protected equally under the name of god. But, if you refuse my protection and oppose me, you will be judged under god's name and will be burned with the flames of hell. Those who respect heaven will be given eternal happiness. Those who look down on heaven must pay the price of one's foolishness with one's own life. I promise my eternal rule and I allow only souls worthy to gather to my knees."

Anakaris has many supernatural abilites such as the ability to make his own bandages into weaponry, he can jump very high and float. He can extend his limbs and disappear briefly, curse his opponents into small versions of themselves like animals or related objects. He can disembody himself, and his small servant, Khaibit, takes control of his lower body. He can summon a large snake that acts as his "Strong Punch" command. He can use elemental magic in some of his attacks, as seen in "Pharaoh Magic" and "Pharaoh Salvation". In the EX Move "Pharaoh Decoration", he can turn the enemy into a female version if he is male, or a cute version of the character if she's female, as this was also seen in Demitri's EX Move "Midnight Bliss". He can summon portals to another dimensions or play with space to confuse his enemies in some moves like "Naraku no Ana".

Anakaris must be careful on the amount of energy he uses when in battle, if he uses too much he can get very weak. In order to regain his strength back he must rest.

Khaibit (カイビト Kaibito) is a being that assists Anakaris by controlling his lower half when he uses the Pharaoh Split EX move in Night Warriors and as a Dark Force in Darkstalkers 3. In Darkstalkers 3 Khaibit also appears in the moves Miira Drop inside Anakaris' sarcophagus and Pharaoh Decoration where he is transformed into a female egyptian with bandages and a snake for a hand similar to Anakaris' Cobra Blow. Khaibit also appears in Anakaris' taunt in Darkstalkers 3 and in a special winning pose if you hold three kicks after defeating your enemy; it's possible to control Khaibit when Anakaris is tossing the golden coins. According to ancient egyptian beliefs, the Khaibit was the shadow of a person and acted as a subconcious entity, was sentient on its own, separating itself from the human body even after death. In Street Fighter V, the female form of Khaibit that appears in the EX move Pharaoh Decoration is available as an alternate costume for Menat.

Anakaris has a wife called Anamaha (アナマハ). She is seen in a special win pose if the player does a perfect win against Pyron in the second game. The name Anamaha was given on a Japanese guide. 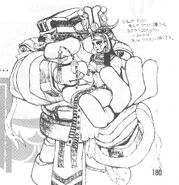 Mummies exist in almost every ancient culture, the most famous kind being the Egyptian mummies. One of the most famous mummies of all was King Tut, who started the entire mummy horror movie craze. How this came about was when the people excavating Tut's tomb began to suffer sicknesses and die. This was actually due to a fungus that was growing inside the tomb itself, and its spores eventually went into peoples' lungs, which led to their doom. Back then, people assumed it was a curse, and this curse was what spawned a fabulous legacy of horror films and eventually the solidification of the mummy as a Hollywood horror icon.

In ancient Egyptian culture, it was a custom to mummify the dead. Those who presided over the embalming would remove the brain and various other body parts, and eventually, after many other things, they are finally placed in their tomb. Egyptian Pharaohs had a unique twist when they were buried: their servants, dead or alive, and along with various other things, would be buried with them. They did this to get the pharaoh ready in the afterlife, where they can be a god themselves. Pharaohs were believed to be gods themselves.

Darkstalkers the Animated Series; in the series Anakaris works for Pyron. He also speaks in non sequiturs. His first major appearance was in the episode "Pyramid Power" where he believes Felicia to be his wife who left him for a merman. Like all the Night Warriors cast, Anakaris also appears briefly in original video animation for Night Warriors: Darkstalkers' Revenge.

Although not a major appearance, Anakaris appeared in issue 01 of Udon Entertainment's Darkstalkers: The Night Warriors where he was awaken by a Huitzil unit. After defeating it in battle he went back to sleep.

Also used in Marvel vs. Capcom 2 and Capcom Fighting Evolution.